We trucked West Wind II across the northern US, in December 2010, just ahead of the winter snow to Anacortes, Washington and from there to our home port of Victoria, BC, Canada arriving just before Christmas. This would be West Wind II‘s first winter over in the water, not on the hard. In January 2011, I stepped the mast, re-attached the pulpits, bent the sails and took her for her first sail. All my expectations were exceeded and I knew then, she was the one. She had incredible sea-keeping qualities and great turn of speed. And so, the journey begins.
Although I was eager to start the refit right away, I also wanted to be able to sail West Wind II over the summer. As I had hoped, she performed beautifully on her inaugural sail, but was in urgent need of new sails, particularly the main. Her running rigging was awkward for a single-hander and I knew exactly what I wanted, having sailed solo across the southern ocean. The rig would be simple. No bells or whistles, no clutter, just business. I would remove three of the five winches from the mast and replace the main halyard winch with a #23 Harken self tailer. All the rope-to-wire halyards would also be replaced. I would remove the TV antenna and radar from the mast and the microwave oven from the galley. You could say I was making my mark.
I spent a fair amount of time in the weeks and months ahead on West Wind II, making material lists, deciding what I could afford to do first and what could wait til later. I began in earnest with these three priorities in mind. She had to be easy to handle single-handed, comfortable, and she had to sail well. Because my voyage is non-stop, I have to be able to carry provisions including food, water and fuel for 14 months. In addition, I have to install navigation and communications electronics and have the right combination of batteries to power them. My philosophy is and has always been, “If I can’t fix it, it isn’t worth having on board,” so all of my systems are simple. I don’t, for example, have a water maker (except an emergency manual one), refrigeration, or source of heat. My two water tanks hold 45 gallons and I replenish my supply en route with rain water collected from the deck and sails which empties through deck drains into the tanks below. The most important piece of equipment on board is my Fleming self steering vane which requires no power other than the wind. Second to that is my ICOM 802 ham radio and EPIRB. Here are some of the highlights of the refit.
The Companionway hatch
The original hatch on West Wind II was the classic sliding horizontal design with vertical drop boards. Works well enough for family cruises in fine weather and sheltered waters. The inspiration for the design of the new hatch came from the Open 60s sailed by single-handers in races such as the Vendee Globe. These hatches are strong and can withstand the rigors of the southern ocean. They’re water tight and easy to operate – everything a single hander needs to be safe, and importantly, dry. A Lewmar open ocean hatch placed at an angle in the old main hatch opening served the purpose. It allows for easy access in a hurry and fulfills the need for a hatch that’s water tight and safe. The idea of adapting this hatch for a cruising boat came from Susanne Huber aboard So Long – a Rhodes 41. Susanne and I passed one another going in opposite directions in the southern Indian ocean while we were both single handing. I later met Susanne on board So Long in Cadboro Bay, Victoria, BC in 2009 where I saw her fine adaptation and decided to copy it. I built a plywood mock up to establish the desired opening size and angle. The challenge was to make it structurally sound and ergonomically correct. Because it was at a 45 degree angle, it was difficult to maintain  structural integrity. I incorporated 2 X 2 teak rails, 1/4 ” aluminum backing plates, 5/16 ” bolts and #16 wood screws – approximately 100 of each. 1″ marine grade plywood was used for the infill areas and West System epoxy for all the joints, International polyurethane paint for the outside finish. 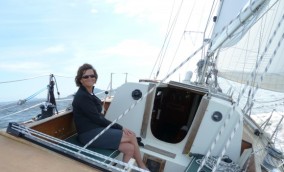 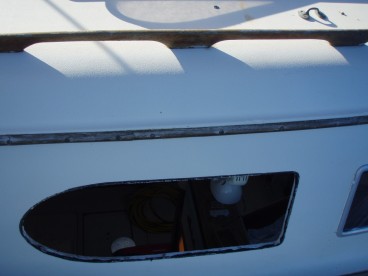 In this video, Glenn describes the installation of 100 ft. of copper mesh to the hull, cockpit lockers, water tank storage area and other areas to make sure he gets excellent reception on his ham radio.
Scraping the bottom of the keel.
Replacing the deck 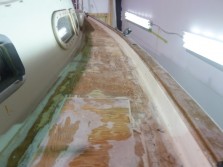 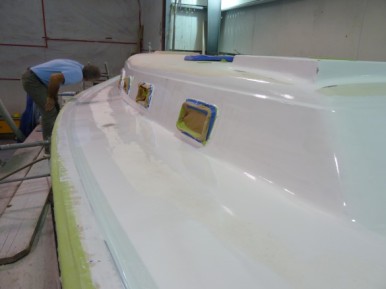 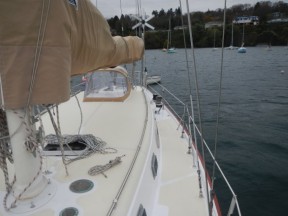 Back at Canoe Cove March, 2013 for hull paint job. But first, a little sanding.
The toe rail was secured to the bulwarks by 2″ x  3/8″ machine screws at 7″ on centre. The fibreglass toe rail was first threaded with a tap and then each bolt was epoxyed in place and secured from below. I did this in November and December while the boat was on the mooring (single handed). The finished toe rail is a custom 2″ x 2″ SAE 6061 aluminum angle toe rail with clear coat made by Associated Sheet Metal.
Freshly painted by Blackline Marine, West Wind II is launched at Canoe Cove Marina.
Sporting her newly painted name and home port. Mast stepped, fully rigged and sails bent, West Wind II sits comfortably on her mooring in Cadboro Bay. 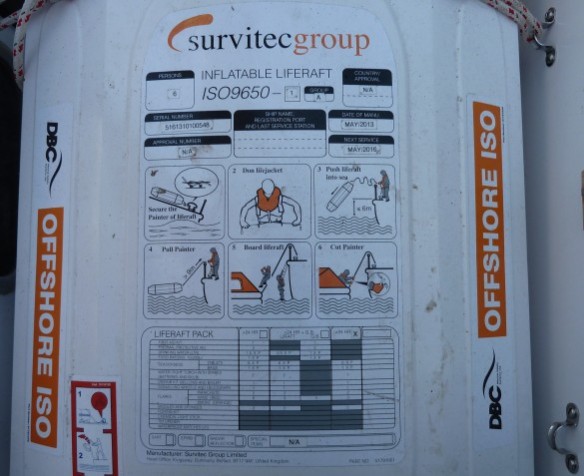 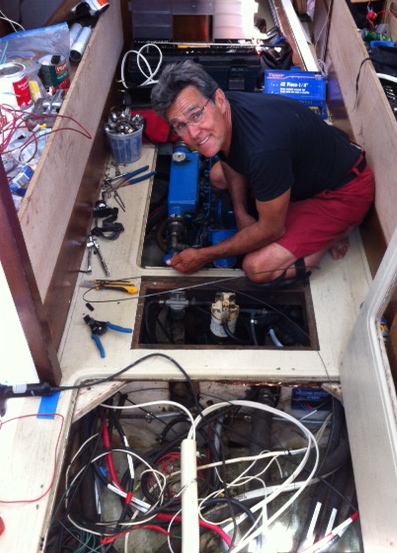