While Glenn sails around the world single handed, I’ll be telling the story on these pages from our home in Victoria, British Columbia, Canada 48.4328° N, 123.3347° W.

We thought ‘Going Solo’ was a good name for this blog because it’s what both of us will be doing while Glenn’s at sea. This time around, our two daughters are living away from home. Claire is in New Zealand studying midwifery, and Nicola is in Melbourne, Australia working and hoping to start a career in interior design.

When Glenn made his first attempt in 2007-2008, I created a blog and posted daily updates and photos. Within weeks, thousands of followers around the world became interested in the story and wanted to engage with him. They sent heartfelt messages and offered words of encouragement and, they asked a lot of questions. They also told their own personal stories of adventure and shared their own dreams. Glenn appreciated that people reached out to him and was more than happy to write back. Kids in a grade 5/6 class in Maclean, Saskatchewan let us know they were following Glenn’s voyage every day as part of their geography class. They also asked lots of questions which Glenn answered …with pleasure.

Other than write the daily blog, I wrote articles and managed requests from the media here, in the US, New Zealand, Australia, South Africa, Argentina and the UK. I published my first article in a UK yachting magazine called Yachting World. It was an exciting adventure – on and off the ocean. 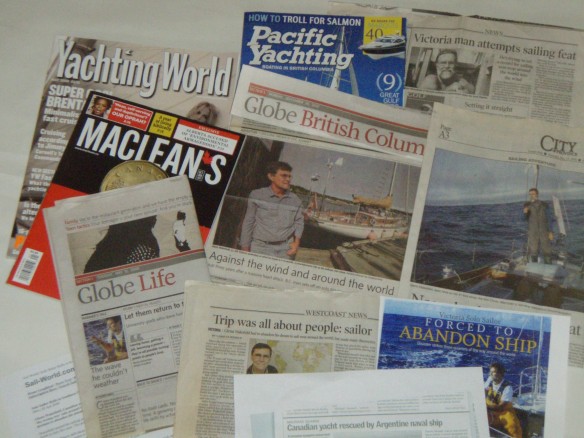 When I’m not posting on this blog, I am a Principal in Encore Communications, a communications consulting firm for business and entrepreneurs in Victoria, BC Canada. I also write for several magazines and an online post secondary education site and I blog about the power of storytelling for business at StorythatMatters. When I’m not behind a computer, I’m on my bike, yoga mat, paddle board, and, more often than not, behind the lens of my camera.

I’d love to hear from you so feel free to leave me a comment.